What can we learn from the Women in the World Summit?

Inspiration: Many of the speakers travelled from across the world to share their stories

As a journalist I am constantly reminded of how lucky and blessed my life is, but at time it is very easy to lose perspective.

The Women in the World two-day Summit, which took place at Cadogan Hall last Thursday and Friday, was an enlightening dose of reality. By the end I was emotionally drained, but of course very grateful to have spent the day hearing from some of the most inspiring and courageous female activists, artists, entrepreneurs, political leaders, journalists and peacemakers in the world.

Many of the women travelled afar to share their inspiring, tragic and uplifting stories with us. The line-up also included international and British speakers, such as Hollywood actress Nicole Kidman, Home Secretary Theresa May, First Minister of Scotland Nicole Sturgeon, actress Meryl Streep and model Cara Delevingne.

For us to “See the world through their eyes and draw strength and wisdom from their stories,” said founder Tina Brown in her opening speech, and we certainly did.

The Friday event opened with Ben Ali Saliha, a mother from Belgium whose son was manipulated by extremists and was later killed fighting for ISIS.

She said: “He [Sabri] stopped socialising and seeing his friends. One morning, I went into his bedroom and his room was empty. My instincts knew something wasn’t right.”

The mother supports other families to come to terms with their children being radicalised with her charity Society Against Violent Extremism (SAVE) in Belgium. She is also passionate to help parents recognise the signs in their children before they leave to join ISIS. 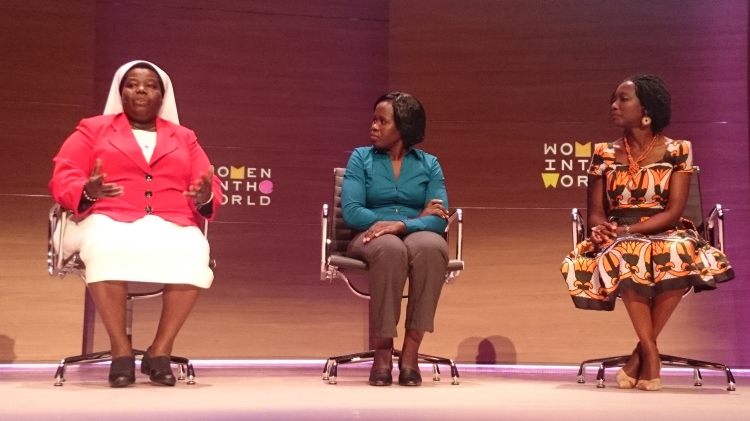 Polline Akello, was only 12-years-old she was kidnapped from her home by the Lord’s Resistance Army, taken to the bush and subjected to six years of abuse and violence. She eventually managed to escape and met the abductor who had ripped her life apart.

When asked how she survived years of abuse, the devoted Christian said: “I got through this terrible time knowing that one day I would be able to escape. I love god and knew God was molding me for something. He wanted me to the voice of the voiceless and of the children suffering in the war.”

After returning to Northern Uganda, Akello began working as an advocate for children in conflict and champions for better support for other young victims of conflict.

For the last 30 years, Sister Rosemary Nyirumbe, had been working hard to rescue girls in Uganda and South Sudan, areas discriminated by war.

The nun has saved more than 2,000 girls, who have been victimised by the Lord’s Resistance Army and helping them to rebuild their lives.

“The year 2002 was a time when everyone was living in fear. Abused women and girls were being trained as child soldiers, trained to kill their siblings. At the time, I felt helpless.

“Taking in the girls and helping them to heal is a long process, accepting someone with that background [who was forced to kill], offering your arms and saying come as you are. That’s all what I have always done by helping these girls.

The convent offers a refuge to girls who have been disowned by their families while helping them to deal with the trauma of the horrific events they have suffered.

Nyirumbe told the audience: “I put two girls in the same room and one came to me and told me she felt guilty as she had played a part in killing the other girl’s parents. So I asked her ‘aren’t you helping her look after her child’? and she answered, ‘yes.’ So I said you two are sisters.”

The nun is also the director at St. Monica’s Girls Tailoring Centre in Uganda, where she teaches the girls how to sew.

“I help them with rehabilitation by teaching them how to cope with life. I give them skill and training, so they can take away the pain with their hands.

“I feel hopeful for the future and to see women walking with dignity,” she said. 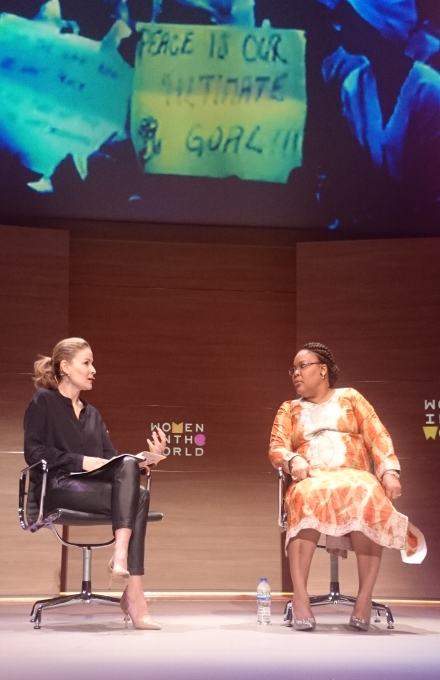 Leymah Gbowee, a Liberian activist and Nobel peace laureate spoke about how she used her internal anger to create the interfaith coalition of women movement to end the Liberia’s bloody civil war, which lasted for 14 years.

The President of Gbowee Peace Foundation said: “No one should ever go to their leaders and say ‘we can no longer go on being hungry, homeless and raped.”

“When the war started, I remember vividly the first time I saw a dead body, she was still clinging to the bible and dogs were eating at her. That was at 17. At 29, I could walk past dead bodies without flinching.”

Around 250,000 people were killed in Liberia’s civil war and many thousands more fled the fighting.

Gbowee said: “Every conflict and reality is different. There needs to be a constant projection of everyday reality of what’s going on. We shouldn’t need a picture of a dead three-year-old boy on the beach to be the wake-up call for the refugee crisis. We need to be concerned where death and construction is a daily occurrence.”

Voices from the edge

Since the start of the year more than half a million people have made the desperate and dangerous journey across the Mediterranean Sea to create a better life for themselves and families.

Approximately 12 million people in Syria have been displaced — half of the country’s population, while four million have fled, which is the biggest exodus since World War II.

That’s why it was necessary to hear from Mervat Alsman, a Syrian Refugee who shared the nightmare of her recent escape to Britain.

Now living in Bradford, Alsman said: “I was so frightened when I saw the boat, but I knew I had no choice. The boat was packed with about 700 people and there was no water or food. It crashed with the other boat for food and water. What I have done is stupid, I’m going to kill myself and my daughter just to save myself.”

My escape from North Korea

The 22-year-old broke down in tears as she described seeing her mother raped when they were captured by traffickers after crossing the frozen Yalu river into China in 2007.

“The first thing I saw was my mum raped. This man was trying to rape me. I didn’t even know what sex or kissing was, and my mother protected me.

“They said if you are in China you have to be sold, you have to get married. And something that still saddens me is that I actually didn’t care, I was so hungry.

“My mum was sold for $65 and I was sold for $260 – at the age of 13,” said Park, now a rights advocate based in South Korea who campaigns against trafficking.

Park who is now based in South Korea, has written a memoir: ‘In Order To Live: A North Korean Girl’s Journey to Freedom’ depicting her life on the run.

The twin pillars behind Mall 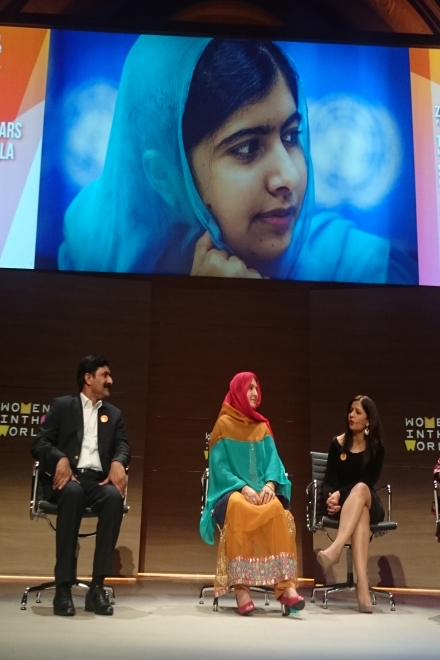 The event ended with Malala Yousafzai’s mother, Toor Pekai, who spoke publicly for the first time revealing that she has returned to school to learn to read and write and is constantly nagged by her daughter to do her homework.

She and her husband Ziauddin, joined filmmaker and anthropologist Samar Minallah Khan on the third anniversary of the brutal attack on her daughter.

Speaking through an interpreter, Toor said: “I love it very much. I enjoy reading and writing and learning, but when I come home and they have given me homework I put my bag in the corner — I say ‘I can’t be bothered,’” she laughed. “But then Malala comes home and says ‘where is your bag, have you done your homework,’ and I want to say ‘Oh it’s a bit hard!’”

Toor Pekai said he did not immediately find out about his daughter’s shooting, which was sad.

He added: “I was very upset about what happened to Malala and upset for the mothers of the men who did it … mothers whose sons attacked a child.”

He also commented on Western parenting styles and stressed the importance of getting more girls into education to better their lives.

“Children learn from what we as parents do, not what we teach. I respect my sisters, I respect my wife: I feel more powerful when she is here beside me. There are 66 million girls not in education in the world. My message is that education for everyone must be our mission, our top goal.”

Like Loading...
« Beyond FGM and empowering others
Calais Jungle camp: Migrants evicted from makeshift shelters prepare for bulldozers »